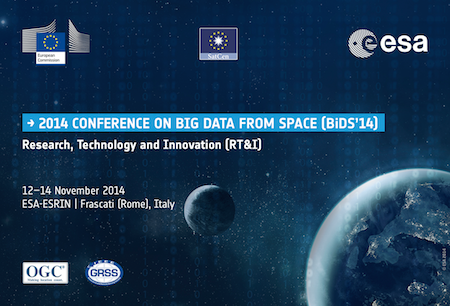 One of the most important event in 2014 in Earth Observation was the 2014 Conference on Big Data from Space (BiDS '14), jointly organized by the European Space Agency, SatCen and JRC in ESRIN< Frascati, Italy, in 12-14 November. The conference addressed topics like:

In this context, ASRC presented the results of ESPOSS project within the dedicated poster session. This gave ASRC scientists the opportunity to promote the dedicated Black Sea platform within the scientific community, and to address and discuss topics of interest for the future development of the platform.

More information on the conference: http://congrexprojects.com/2014-events/BigDatafromSpace/introduction.

Efforts have been invested in in the observation, characterization and forecasting of ocean-atmosphere interactions and their impacts in climate and human activities. This is due to the fact that physical and biochemical interactions between oceans and atmosphere involve several key processes governing the Earth system dynamics and its climate.

In this context, the 'Earth Observation for Ocean-Atmosphere Interactions Science 2014' conference was held at the European Space Research Institute (ESA/ESRIN), Italy, on 28th-31st October 2014. It brought together scientific institutions and space agencies involved in the field, and facilitated the communications and scientific exchanges among different communities in order to enhance the coordination of specific scientific efforts.

ASRC took part to the event, presenting a poster that offered an insight of the company's efforts in ocean related issues, developed within the ESPOSS project. This gave a chance to ASRC scientists to develop new contacts and to set bases for new initiatives addressing key aspects of Earth Observation.

Details on the event: http://www.eo4oceanatmosphere2014.info/.

Considering its interest in the field of maritime environment monitoring, ASRC was represented at ‘MyOcean Science Days’ event that took place between 22-24 of September 2014 in Toulouse.

The conference targeted objectives such as: reviewing the status of MyOcean, MyOcean-2 and related EU funded projects activities and results, enhancing the scientific exchange between actors of operational oceanography worldwide, and linking the MyOcean scientific needs with national and international research projects.

ASRC representatives exchanged information and the experience they gained in ESPOSS project with scientists participating in the conference, setting bases for further cooperation in the field.

On 5th of June 2014, the National Agency for Environment Protection (ANMP) has marked the World Environment Day with the organization of activities addressing ‘Small Islands and Climatic Changes’ topic.

Within this initiative, ASRC, in collaboration with ANMP, has organized a ESPOSS dedicated workshop, that gathered potential ESPOSS users. The application has been presented to the audience, and demonstrations have been conducted on the implemented functionalities.

High interest have been shown by the participants, and furher colaboration with those has been established.

Forecast data regarding significant wave height and total water level for Black Sea has been lately integrated in the ESPOSS platform. This information is operationally delivered, each day, to

Kassandra is a storm surge operational forecast system, consisting in a 3D finite element hydrodynamic model (SHYFEM), including a tidal model, in a third generation finite element spectral wave model (WWMII), fully coupled to the hydrodynamic model and using as input surface data (wind and pressure) obtained from a suite of meteorological models provided by ISAC-CNR. The numerical simulation system provides daily forecasts, to maximum 4 days each, for the Mediterranean and Black seas, at steps of 3 hours for the total water level (tide + surge + wave set-up) and significant wave height (computed in terms of zero moment of the wave spectra, which is the volume of the spectra).

Three new features were implemented lately within the ESPOSS platform:

Why not try them and let us know your feedback!

Our team aims to offer ESPOSS users the best services; therefore we are continuously looking for ways to improve. Having that in mind, a cooperation agreement has been concluded with the National Institute for Research and Development of Marine Geology and Geoecology (GeoEcoMar) regarding the MAREAS portaland the EUXINUS network.

MAREAS portal (Black Sea Joint Regional Research Centre for Mitigation and Adaptation to the Global Changes Impact), developed by GeoEcoMar, represents a mean to share resources and competences for protection and preservation of the Black Sea environment. Information within the ESPOSS portal are included in MAREAS, through a demonstrative link that is accessible to the users.

Information within the ESPOSS portal will be used within EUXINUS in order to correlate the satellite measurements with direct ones made by the network.

The annual FOSS4G-Europe, gathering together the European Open Source Geospatial Developers, Users and Leaders, will take place between 15th to 17th of July 2014, at Jacobs University Bremen in the heart of Europe. The free and open source conference and exhibition offers geospatial communities, research groups and businesses a place to meet, share ideas and have fun. "Independent Innovation for INSPIRE and Big Data" is the motto for this year, characterizing the independence of the Free and Open Source movement from commercial product interest, and the power of innovation which the worldwide networks of FOSS enthusiasts unleashes. ASRC team intends to present the ESPOSS portal during the event. More information can be found "here": http://www.foss4g-e.org/. 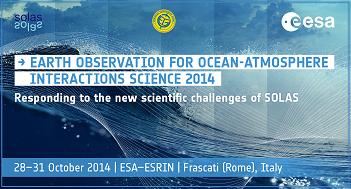 ASRC will attend **‘Earth Observation for Ocean-Atmosphere Interactions Science 2014’** conference that will be organized between 28th – 31st of October 2014, at ESRIN, Frascati.

Oral and poster sessions will be organized around dedicated Themes:

You can find more information here. 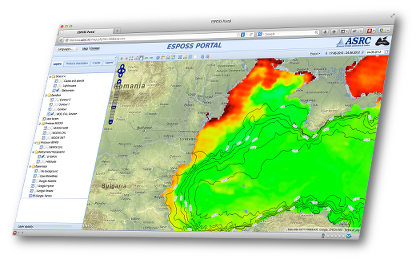 ASRC is honoured to invite you to the 2nd ESPOSS User Workshop, organised on the 8th of November 2013. The workshop will offer the chance to a larger number of users to to be introduced into the existing and planned portal functionalities, and to contribute with additional requirements.

The workshop will take place in Bucharest, the location to be announced shortly. The participants are kindly requested to confirm their interest and to register by e-mail, no later than 29th of October, at blacksea@asrc.ro.

You can download the full invitation here. Please do not hesitate to forward this invitation to other potential users that might be interested in the ESPOSS application.